PicoSure™ is the world’s first safe and effective picosecond aesthetic laser. This unparalleled breakthrough in laser technology delivers ultra-short pulse bursts of energy to the skin in trillionths of a second. The picosecond pulse width is 100 times shorter than the current nanosecond technology used by QS Nd:YAG lasers, enabling unmatched photomechanical impact for better clearance with fewer treatments and less energy fluence.

PicoSure ultra-short pulses create intense pressure waves which cause greater disruption of the target (typically tattoo ink but it can also be used and is FDA approved for benign pigmented lesions).  These ultra-short pulses trigger the shock waves that then allow the use of lower energy.  These shattered ink particles then are more easily eliminated from the body. This produces better tattoo clearance with fewer treatments and also with less injury to surrounding un-tattooed skin.

Importantly, even dark stubborn blue and green inks and also previously-treated resistant tattoos can be removed. The FDA approval is based on the clinical work performed at the Laser & Skin Surgery Center of New York under the direction of Dr. Roy G. Geronemus. The Laser & Skin Surgery Center of New York study included 22 subjects with multicolored and recalcitrant tattoos that were treated with PicoSure™ over a two-week period. The results demonstrated greater than 80% overall tattoo clearance. On average, 94% clearance was achieved for blue and green ink. This study has been published in the Archives of Dermatology. 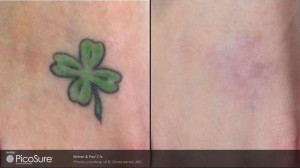 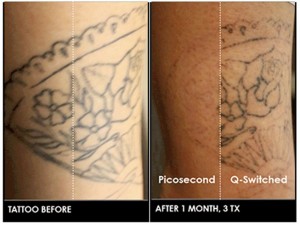 For patients who wish to prepay for a package of treatments, we do offer some special discounts.  If you buy 4 treatments with the PicoSure laser you receive a 10% discount.  We do not advise prepaying for more than this 4 treatment special.

Should I get the PicoSure™, or should I try one of the other lasers first?

The PicoSure laser costs more to own and operate, so costs for each treatment are higher than for traditional laser treatments.  However, there are many benefits to PicoSure treatment.  PicoSure typically requires fewer treatments.  So not only does tattoo removal progress more rapidly, it may need fewer total treatment sessions which helps offset the higher cost per treatment.  Because the PicoSure treatments do cost more, you may opt to begin treatments with one of the other lasers and see how well your tattoo responds, and then change to PicoSure for difficult areas.  If you have previously attempted to remove the tattoo, the PicoSure may be the best option to deal with the residual ink particles.  If your tattoo has a lot of green or blue ink, the PicoSure may provide better clearance of the tattoo as well.  We can assess your tattoo during a free consultation and advise you on the benefits and drawbacks.