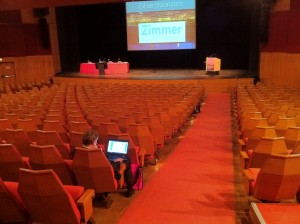 Greetings from the 5 Continent Congress on cosmetic and laser surgery.  This meeting was held in Cannes this year, where I had the pleasure of seeing a lot of old friends as well as many new luminary cosmetic surgeons.  Exchanging the European viewpoint on cosmetics with American ideas is a great way for us to all benefit.  I have some new ideas and tips and can’t wait to share them with our staff and our patients.  Since Europe is “ahead” of the USA on many new treatments and products due to our slower regulatory system here with the FDA, it was really nice to preview things soon to come to America.  Dr. Zein Obagi, creater of the Obagi® product line, was a speaker there and he and I were able to speak afterwards.  He invited me to visit him in Beverly Hills sometime, but in the meantime we discussed some of his his new ideas on skin care.  FYI- he still thinks “active vitamin A” is one of the cornerstones of anti-aging and skin rejuvenation.  I also strongly believe this as many of you know. Dr. Obagi has a new non-prescription skin care line now called ZO Skin Health (which is between over the counter and the original medical prescription Obagi® line).   I also had dinner one evening with my friend Dr. Ghislaine Beilin who is a cosmetic dermatologist to the stars in Paris.  She had just returned from China after opening a new spa there (she consults for spas around the world) and I learned some fascinating new ideas from her as well, a few of which I will try to incorporate here. Overall, the 5 Continent Congress was a very successful and insightful meeting.  I would also note that the Mediterranean diet really is a lot healthier than the typical American diet!  I look forward to the next meeting in two years and to sharing all of this insightful new information.